Every year in the United States millions, sometimes even billions, of dollars are spent by the insurance companies to repair damage caused by natural events.  Damaging storms are not unusual, they are happening all of the time.  Relative to roofing, damaging events will be associated with wind (straight-line winds, tornadoes, hurricanes, etc.) and/or hail storms.  The type of damage each of these events causes is very different but each of the events results in the roof to no longer be an adequate waterproof covering over your home.

The information below will introduce and explain why these events are damaging to your home and hopefully answer the common question of, “Why is my insurance going to pay for a new roof?”

Hail storms can occur any time 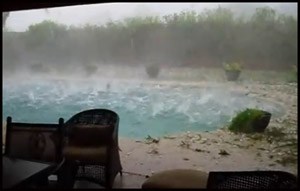 throughout the year but they are most likely to be severe from April to July and again in September and October, basically in spring and fall.  These events will usually occur in the afternoon or early evening hours and are more likely when there are large temperature differences between the highs and lows for the day.  These temperature differences are contributing factors in creating volatile upper level winds that will circulate the hail stones back up into the atmosphere multiple times until they become heavy enough to fall to the ground.

Small hail stones (pea, marble, even quarter size) don’t cause much damage unless high winds are pushing them and increasing their speed and force of impact.  The likelihood of the hail causing damage increases significantly when the hail stones are greater than 1” in diameter.  These hail stones will damage roofs, dent cars, break windows and siding, dent garage doors, damage fencing, destroy trees and flowers, and even kill people if they are caught in the storm with no protection.

If your roof is metal, the damage will likely be cosmetic, not creating a leak problem but it is still damage – besides who wants a roof that looks like Swiss cheese?  Other roofs like wood, tile, or slate, will almost definitely have cosmetic damage from a severe hail storm but there is also the possibility of the hail cracking and breaking the individual roof pieces creating the possibility of water to enter the house over time.  The most common type of steep slope roofing is asphalt shingles and they are also the most vulnerable to hail damage.  Hail damage to a roof is the most misunderstood type of damage because it is not obvious to the untrained eye and it usually cannot be seen from the ground.  But, hail damage to your roof is very real and very serious to the safety of your home.  This is why Tuttle Contracting recommends every homeowner have their home and roof inspected by a storm damage professional after any severe event like a hail storm.

This is what is so deceiving about hail damage; often a water leak does not become visibly evident until weeks or even months after the storm.  The real enemy after a hail storm is time; the longer you wait, the greater the chances are you will have problems inside your home as well as on the outside.  Don’t expect your roof to leak right away, but it will leak eventually if it is not taken care of.

The primary cause of wind related damage to roofing is hurricanes.  Yes, 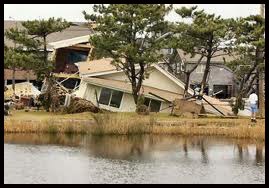 other wind events such as tornadoes or straight-line winds can also cause damage but they are minor in comparison to the damage caused by even one hurricane.  Hurricane season officially begins June 1st and ends November 30th but the greatest chance of a hurricane is in August and September.  Hurricanes can affect any part of the southern and eastern coastlines from Texas to Florida and up the coast to Maine.  But it is not just the coastline that is subject to wind damage.  Depending on the size of the hurricane, damaging winds can extend hundreds of miles inland.  For example there were roofs replaced in Ohio from Hurricane Ike that hit Houston Texas in 2008, approximately 1,000 miles away.

Hurricanes have sustained winds of 74 to 155 miles per hour and cause major damage to large areas when they make landfall, and the wind is only half of the cause of damage.  Large waves and storm surge from the ocean will cause major flooding; totally removing some houses from their foundations, destroying vehicles and boats, houses and commercial buildings that remain are destroyed inside and out, personal possessions are washed away, trees are uprooted, roadways are damaged, and the list goes on.  This type of damage is limited to the reach of the water, but the wind is much further reaching causing roofs to be blown off, windows blown out, trees blown down, signs and billboards completely removed, and personal possessions blown away never to be found.

The greatest factor on how well your roof will withstand the wind will be the age of the roof.  With age, the sealant between the shingles and the shingles themselves begin to dry-out and become brittle, this makes it much easier for the wind to get under the shingles, break and damage the shingles, and even blow complete sections of the roof off the house.  It is true that certain shingle types and designs will withstand wind better than others, but if it is too old, design will make little difference.  It is also true many new shingles can carry a wind warranty up to 130 miles per hour, but that is for new shingles and only if they were installed to meet high wind specifications.

There is no roof exempt from wind damage, it doesn’t matter what type; metal, tile, wood, slate, or asphalt; for one reason or another they can all be damaged.  Tile, wood, and slate roofing all have a membrane under the top layer of material that plays a key role in waterproofing the home.  If this membrane is punctured for any reason, the house is no longer waterproof, even if the top layer is still in place.  As long as wind is not able to get under the metal roofing it will withstand very high winds, but once the wind is under the metal it will lift it and bend it like paper.  Asphalt shingles, the most common steep roof material, can withstand high winds but age and installation will greatly affect how much wind it can handle.  Because there are so many factors and variables, Tuttle Contracting recommends that any time there have been sustained winds at or above 60 miles per hour to have the roof inspected by a trained professional. 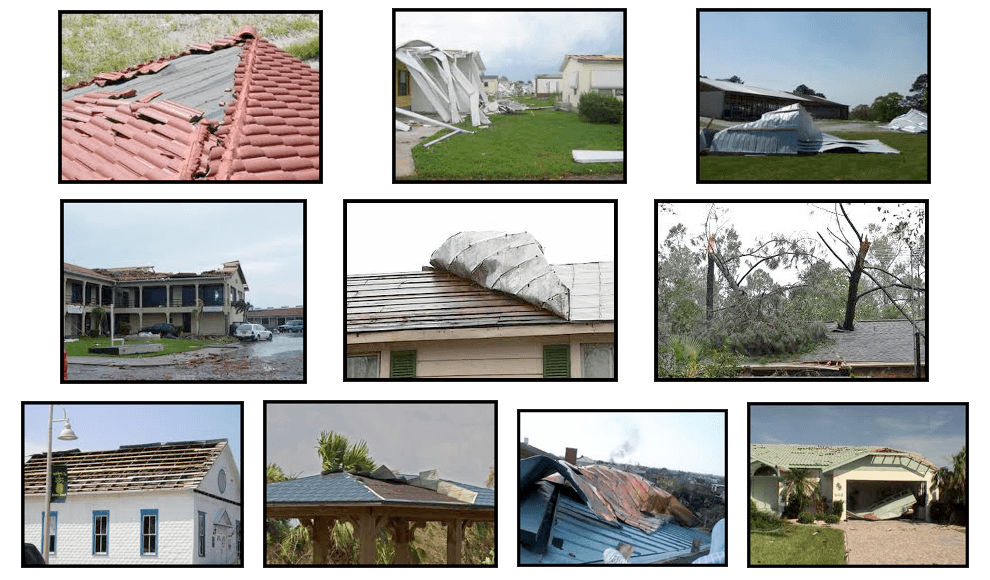 The obvious needs no explanation; when you walk outside and the shingles are gone – there is obviously a problem.  But it is important to understand the whole roof likely sustained damage from the wind and not just the area of missing shingles.  The reason for this is that all asphalt shingles have a strip of sealant that “glues” the upper shingle to the lower one; if the wind was bad enough to completely remove shingles from the roof it was likely bad enough to break the sealant line in multiple places around the roof.  Another result of wind damage is that fasteners (nails or staples) can and will pull through the shingle allowing the shingle to “flop” but not necessarily be blown off the roof.  Broken seals and torn fasteners cannot be seen from the ground, but are considered direct damage as a result of high winds and are covered under your insurance policy.

Another indicator of damage from high winds is crease lines along the length of the shingle.  This happens when the wind has lifted the shingle and after multiple times of lifting and falling, the shingle forms a crease before it breaks off.  Many times creased shingles will remain “hanging on” to the roof and are not easily noticed from the ground.  Creased or cracked shingles are also an indicator of an old roof, and possibly a roof that is not repairable.  Similar to hail damage, many aspects of wind damage cannot be seen from the ground and require a physical inspection of the roof to accurately determine the scope of damage.

At Tuttle Contracting we want to see your home protected as if it were our own.  Partial roof replacements or repairs are not something we recommend after a severe weather event.  If you are like many of our customers and the insurance has only provided partial replacement of your roof, we can help.  Through the use of industry accepted tests and guidelines established by Haag Engineering, we will document and present the reality of the damage done to your home to your insurance company and work to ensure that you have the funds to properly repair your home.